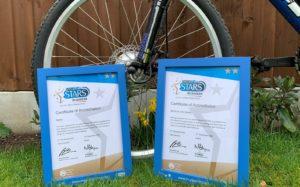 Twelve more organisations in the city have recently gained accreditation through the Modeshift STARS scheme for encouraging their staff to take up more active modes of travel when commuting to work such as walking, cycling or using the bus, train or tram.

In total, approximately 350 Birmingham based organisations, including schools, hospitals, universities and businesses are now registered on the Modeshift STARS scheme which provides the tools to create an effective Travel Plan and achieve nationally recognised accreditation.