LGBT+ History Month takes place throughout February and the theme this year is Body, Mind and Spirit.

Modeshift would like to celebrate Graeme Obree.  Nicknamed “The Flying Scotsman” Graeme is a Scottish racing cyclist who twice broke the world hour record in July 1993 and April 1994.
During his career he broke the world hour record twice and became the individual pursuit world champion in two separate years. He was renowned for his unusual riding positions and “Old Faithful”, the bicycle he built which included parts from a washing machine. In 2005, he came out to his family as gay. 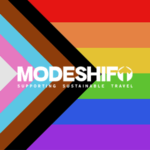 Throughout the month Modeshift would like to feature our Members and Partners projects, events and activities that are aimed at promoting active, safe and sustainable travel to the LGBT+ community.  Please email Modeshift at info@modeshift.org.uk